“A kiss. You call that a kiss?” Jane Fonda says seductively to her sexy co-star Robert Redford in the classic film Barefoot in the Park. Standing coquettishly in his nightshirt outside the honeymoon suite of their Plaza Hotel room, six days and nights after they took their vows. Redford gives her a peck on the lips and heads for the elevator – dressed and ready to get back to work. He explains to her, exasperated that he “doesn’t do this for a living.”

Beginning to unbutton the nightshirt clinging to her body from the top down, she impishly responds to him, “If you call that a kiss, don’t bother coming home tonight” and, ”If you don’t get back here right now and give me a real kiss I am going to…”

This scene is engrained so deeply in my soul and psyche. It’s a film clip that I have shown hundreds of times in my Level One Trainings to illustrate a certain dynamic in relationships. And judge as you may Jane Fonda’s co-dependence on her new husband – she knew the difference between a peck and a real kiss.

A real kiss? What is the difference between a kiss and a real kiss. Is it something only found in the movies or was this newlywed actually pointing to something bigger.

What is a kiss? Is it a noun or a verb. To kiss or be kissed: that is the question. There is the kiss of a mother with her newborn child or a dog owner on the belly of her pup, or the peck of friendship that is not gender-based or -biased.

Miriam Webster defines kissing as the touching of two sets of lips, especially as a mark of affection or greeting. Hmm, not to be confused with a kiss off, kissing up or a kiss ass or even the feared kiss of death.

William Cane in his book The Art of Kissing speaks of numerous kinds of kisses; from a first kiss, to eye kiss, electric kiss, lip kiss, teasing kiss, long kiss, public kiss, surprise kiss, etc. He also refers to kisses known from around the world including the famous French and Eskimo kisses, as well. Not to mention the technique of kissing such as to look or not look, talk or laugh or just what to do with your hands.

Why is it that, according to Cane, 90% of people remember their first kiss. What is the power behind the kiss? Why is it that for some people, including myself, kissing is far more intimate and powerful then sexual intercourse?

I think, for me, kissing is more like sky diving without a parachute, a kind of free-fall into the void of the moment.

I remember my first and second and third kiss as they span the time frame of twelve years! My first kiss took place when I was 4 years old. We lived next door to two boys my age and a bit older. Marty and his brother David and I used to peek at each other standing on our tip toes through the windows above our beds. I was smitten with him. And following that first kiss, or more actually peck, butterflies took up residence in my young belly and didn’t leave until we up and moved to another part of the city soon thereafter. And I never heard from my two brothers again.

My second kiss came when I was in 6th grade at a year-end class party that my parents were hosting in our backyard. My parents, who had the reputation of being cool, seemed to turn a blind eye as we kids began a game of spin the bottle, which ended as free-for-all kissing in the backyard. Michel, the most popular boy in our class laid a wet one on me and it felt like that same flock of butterflies landed back in my little girl belly and remained there throughout the summer.

And then there was my third kiss, which happened just before my 16th birthday on a cruise with my aunt and uncle from Victoria, Canada back to Los Angeles. Following an extraordinary winning streak with my cousin at Bingo, a young man took notice and I brought my 16th year in with a brand new flock of butterflies.

Yet, interestingly enough, the kiss I remember most of all was that of a stranger.

He was a young man I met one night at a gathering in my college cafeteria. I have no memory of his name or how we ended up on the lawn under the maple tree. All I know is that we kissed for over two hours and I mean just kissed. Maybe because there was nothing to lose and nothing to gain – a chance encounter with a young man who was willing to freefall into my mouth – I fell head first into his and one soul butterfly took up residence in the place called my memory. And kissing became a path to presence. 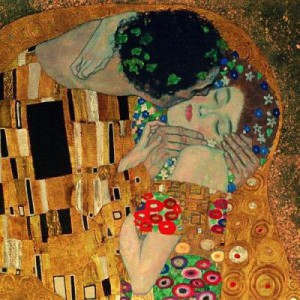